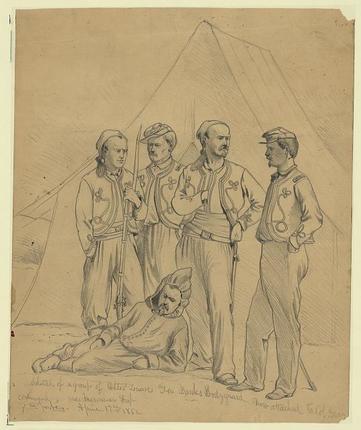 A Field Sketch of Members of The Original Company.
INDEPENDENT CORPS, ZOUAVES D'AFRIQUE

This company included many French soldiers who had served as Zouaves in the campaigns of France and who had been identified with the 18th Regiment, in the three months' service. It was recruited at Philadelphia by Charles H. T. Collis, proposing to serve as a bodyguard to Major-Gen. N. P. Banks. The uniform adopted was that of the French Zouaves d'Afrique and was retained by the 114th Regiment, to which it was latter attached, throughout the war.
The corps was mustered in and sent to Fort Delaware on August 17th, 1861, where it was thoroughly drilled in zouave tactics. Late in September the Zouaves reported to Gen. Banks, at Darnestown, Md. After a period of guard duty the corps went into winter quarters. In the spring of 1862 the command served, for a short time, with Geary's Independent Brigade and then rejoined Gen. Banks in the Shenandoah Valley. In a number of battles and skirmishes, including Middletown, Cedar Mountain, second Bull Run, Chantilly, and Antietam, the Zouaves had shown those qualities of dash and bravery for which this type of infantry is usually famous.
​     After the affair at Middletown, Capt. Collis was commissioned colonel and detailed to proceed to Philadelphia and recruit his command to a full regiment. With nine fully uniformed companies he arrived at Washington upon August 31st, 1862. The original company in the field, from which many of the officers of the new regiment were selected, became Company A.

Total Enrollment: 1,100 Officers and Men
The single company of Zouaves d'Afrique which Capt. Collis had recruited and led to war one year before, formed the basis as Company A of the Zouave regiment raised in Philadelphia in the summer of 1862, and which as the 114th Infantry left the city upon September 1st.
At Washington this command was encamped at Fort Slocum, but soon afterward was assigned to the First Brigade, First Division, of the Third Corps, then commanded by Major-Gen. David B. Birney. The Zouaves received their "baptism of fire" on December 13th, when the division was rushed across the Rappahannock river, at Franklin's Crossing, below Fredericksburg, to the assistance of the Pennsylvania Reserves. The loss of the 114th was twelve killed and seventeen wounded. The Third Corps appeared in front of Fredericksburg again in January, 1863 (Burnside's "Mud March"), and a third time at the end of April, at the beginning of the Chancellorsville campaign, crossing the river, however, at United States Ford, about ten miles above the city. In the battle of May 3d, the Zouaves fought with heroic persistence, finally retiring with a loss of one hundred and seventy-three killed and wounded. Of the twenty-seven officers present only three escaped death or wounds. Among those killed were Maj. Joseph S. Chandler and Capt. Frank A. Elliott of Co. F. The survivors returned after this bitter experience to camp at Falmouth.
An incident following the battle was the capture of the regimental band of seventeen pieces, with their instruments. The unfortunate musicians were eventually exchanged, and being provided with new instruments, remained with the regiment to the end of the war.
The Third Corps reached Gettysburg after the close of the fighting upon July 1st, and was ordered to the left of the new line of battle, then being extended to the Round Tops. On the morning of the 2nd, Gen. Sickles advanced a portion of his corps, including the 114th, to and across the Emmittsburg Pike to the right of the Peach Orchard, under the command of Lieut.-Col. Fred. F. Cavada. The Zouaves were a fair mark for the rebel pickets during the morning and for the artillery fire that preceded the infantry attack later in the day. The Confederates surged along the line like a billow sweeping a stormy beach, reaching the front of the 114th when the Zouaves were forced backward, some, including Lieut.-Col. Cavada, in command, being captured. The regiment re-formed under Maj. Edward R. Bowen, took a new position in front of the Taneytown Road, but was not again heavily engaged in the course of the battle. The regimental losses were nine men killed, one officer and eighty-five men wounded, three officers and fifty-seven men captured or missing. Four of the wounded men subsequently died from their injuries. Those captured were near the Sherfy House.
Through the fall and winter of 1863-4 Maj. Bowen continued in command, Col. Collis being in command of the brigade. The regiment shared the fortunes of the Third Corps in its marching and fighting, including battles along the Rappahannock.
In April, 1864, the 114th was honored by selection as the first of six regiments of infantry and one regiment of cavalry organized as an independent brigade for duty at the headquarters of Gen. Meade. Col. Collis was appointed commander of this body of troops. This duty continued until March 15th, 1865, and involved the assistance of other troops in action, while the elite brigade from headquarters was expected to exhibit a high standard of gallantry.
In the final weeks of activity around Petersburg, the 114th was engaged in the storming of the Confederate works on April 2nd, and, during the pursuit, at Sailor's Creek. At the affair of the 2nd, three veteran officers who had originally served in the Zouaves d'Afrique of 1861 lost their lives. They were Capt. A. J. Cunningham of Company A, Maj. Henry M. Eddy, and First Lieut. Edward T. Marion of Company I.
After the Appomattox surrender, the 114th was transferred to the Fifth Corps, with which the Zouaves marched to Washington, where they were mustered out on May 29th, 1865.

MAJOR BATTLES
(Including those of the Zouaves d'Afrique, afterward Company A, prior to the organization of the regiment) Middletown, Cedar Mountain, Antietam, Fredericksburg, Chancellorsville, Gettysburg, Wapping Heights, Auburn, Kelly's Ford, Mine Run, Wilderness, Guinea's Station, Petersburg. 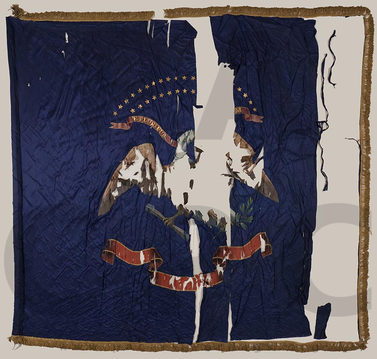